The Department of Health (DOH) announced Thursday, March 12, three more confirmed cases of coronavirus disease (Covid-19) in the country, bringing the total to 52.

The DOH's list of confirmed cases show that the 79-year-old Filipino (Patient 52) has a history of travel to the United Kingdom.

The DOH and deployed surveillance teams, in cooperation with concerned local government units, are now conducting "extensive information-gathering" and contact tracing activities on the new cases.

“So we continually ask the public to cooperate and help us in the investigation and contact tracing activities. Individuals with history of known exposure to a positive patient and/or travel to areas with local transmission, within and outside the country, presenting with mild symptoms are advised to self-isolate and be home quarantined for 14 days. Those presenting severe and critical symptoms need to be immediately admitted to health facilities. Let us be responsible with our own health, family’s well being, and that of our community,” said DOH Secretary Francisco Duque in a statement.

On Wednesday, March 11, the DOH also announced 16 additional cases of Covid-19 in the country and confirmed that another patient died.

The DOH identified the second mortality as Patient 35, a 67-year-old Filipino woman.

The first confirmed death was a 44-year-old Chinese man from Wuhan, China who died in February due to pneumonia.

Patient 35, who experienced symptoms on February 29, was admitted last March 5 at the Manila Doctors’ Hospital and swabbed for testing last March 8. She tested positive for the new virus last March 11 and passed away around noon of the same day due to severe pneumonia.

The DOH said the patient had existing medical conditions, namely, hypertension and diabetes mellitus. She was admitted together with her husband, patient 34, who remains confined at the Manila Doctors Hospital.

“Our recent mortality have underlying medical conditions, making the patient extremely vulnerable to Covid-19. So we reiterate that the best way to protect yourself from the disease is to keep yourself healthy and practice general preventive measures: proper handwashing, cough etiquette, and social distancing,” said Duque.

According to the health department, elderly people (average of 66 years) and those with underlying medical conditions, such as cardiovascular disease, diabetes, cancer, chronic lung disease, and immunosuppression are the ones vulnerable to Covid-19.

“We further urge those who are immunocompromised and are with existing health conditions to be more vigilant and avoid crowded areas and mass gatherings,” Duque added. (LMY/SunStar Philippines)

AS MANY as 6,000 locally developed diagnostic test kits for Covid-19 can be produced in just three weeks, the Philippine Genome Center said.

Dr. Raul Destura, Philippine Genome Center deputy executive director who led the UP National Institutes of Health in developing the Sars-CoV-2 PCR detection kits, said he is confident about the accuracy of the testing kits.

"I am very confident," Destura said in a press conference Thursday, March 12. Sars-CoV-2 is the name of the novel coronavirus given by the International Committee on Taxonomy of Viruses.

The kit was developed by Filipino scientists at the UP-NIH. The Food and Drug Administration (FDA) earlier issued a Certificate of Exemption for the detection kits, allowing its use for field testing coupled with gene sequencing at the Philippine Genome Center.
Health Secretary Francisco Duque III, however, said they could not use the locally developed test kits without an Emergency Use Listing (EUL) permit from the World Health Organization (WHO).

UP executive vice president Teodoro Herbosa insisted that the test kits may be used with just the approval of the FDA.

"All countries that are members of the WHO try to get advice from the WHO. It is not a governing body, it is an advisory body," Herbosa said.

"What regulates the government with drugs, vaccines, or test kits to be used in the health sector is the Philippine FDA," he said.

"They (FDA) regulate what can be sold and used in the Philippines," he added.

Destura said the kits are manufactured by two robots.

"Kasi yung ating manufacturer, it has the robotic manufacturing unit.. we can manufacture on a faster speed. In fact, we might have to add additional robots. Right now kasi, we have two," Destura said.

He said they could make available at least 1,000 kits a week and slowly ramp up production until they reach full capacity.

Destura added that they may have to expand the manufacturing area, but only after a Good Manufacturing Practice (GMP) approval.

GMP refers to a system for ensuring that products are consistently produced and controlled with quality standards.

It shall minimize the risks involved in any pharmaceutical production that cannot be eliminated through testing the final product.

"We are expanding to another area. Kailangan kasi na GMP certified eh to ensure that technology developed are in good quality," Destura said.

In an interview, Philippine General Hospital (PGH) Director Gerardo Legaspi disclosed the standard procedure for people who wish to be tested for Covid-19.

"So ang when this all started ang aming hospital infection unit already formulated a plan so ni-limit na ang entry points. May screening na, and then may mag i-interview bakit sila nandoon. If may lagnat ba or may travel history," Legaspi told Sunstar.

He explained that there is a separate tent for people who test positive for the virus and persons under investigation (PUI).

"So most of the patients naman are not severely sick, so kapag nag positive ang PUIs, they will have to stay in the same room kasama ng mga nag-positive," he added.

"Kasi everytime we move patients contamination of others tumataas," he said.

As of Thursday morning, the Department of Health (DOH) has confirmed that two patients have died from Covid-19 while two have returned to China.

Still admitted in hospitals across the country are 48 other Covid-19 patients, including two who are in critical condition. (SunStar Philippines) 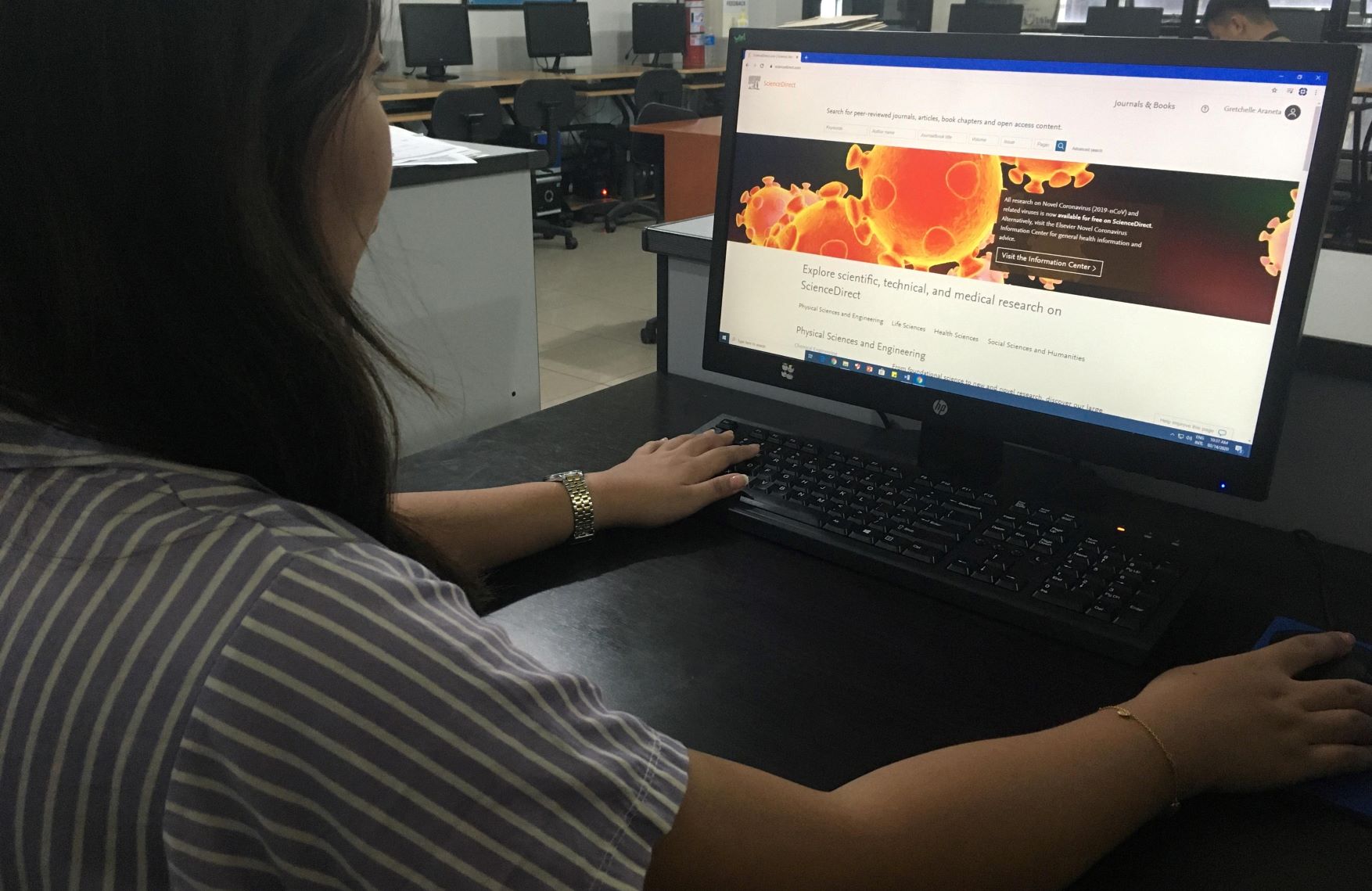 Twenty (20) institutions have recently been granted free access to the Elsevier’s ScienceDirect platform and its Scopus database for the refinement of research output in Region IX.

Access to the platforms has been granted by the Department of Science and Technology (DOST) through the Philippine Council for Industry, Energy and Emerging Technology Research and Development (PCIEERD).

The Elsevier’s ScienceDirect platform hosts an extensive collection of academic journals and e-books on scientific and medical research, while the Scopus abstract and database holds a multitude of journals, books and conference proceedings with smart feature tools to track, analyze and visualize research.

Access to the databases will be available until September 2020 in the following Higher Education Institutions (HEIs), State Universities and Colleges (SUCs), and other Institutions: